As we dare to peer over the lockdown horizon into May we thought we’d offer something musical that is safe and rather special.

We’re not encouraging singing outdoors until we know it’s absolutely safe but in the meantime we’re planning some outdoor instrumental events with some of the best players in The Midlands. All hosted by the irrepressible guitarist extraordinaire Vo Fletcher.

The music will range across all genres – we kid you not, from standards that you know and love to inspirational improvisations as our musicians get the first chance for over a year to do what they all love – playing with other people.

We’ll settle down in the gorgeous Melon Ground with numbers limited to just 50 so that we can all be close to the performers but safely distanced from each other seated at tables. Speaking of tables there’ll be a selection of wines, beers and soft drinks with some excellent artisan pies to snack on if you’re peckish.

Music will commence at 7pm but you’re welcome to arrive from 6pm if you’d like a stroll around our gorgeous gardens whilst you’re here. We’ll aim to finish around 9m. In the event of inclement weather we’ll set up under our stretch tent on the archery lawn where we can all stay dry whilst still being outdoors.

Here’s the schedule of players:

May 27th Vo will be joined by Violinist Ric Sanders

June 10th Vo will be joined by Pianist Phil Bond

Learn more about the musicians joining us here:

In a long and varied career Vocalist/Guitarist Vo Fletcher has played, recorded and toured with: Nigel Kennedy, Fairport Convention, the Ric Sanders Group, Rik Mayall, Tuxedo Bay, Touch & Go, The Albion Morris Band, Catherine Howe and Brent Ford & The Nylons to name but a few. He used to be a presenter on Channel 5 but he’s alright now.

Ric was born and brought up in Birmingham. He joined Fairport Convention in 1985.

The violin was Ric’s first love and he took up the instrument as a youngster. His first professional engagement was in 1972, touring Europe with Stomu Yamashta’s Red Buddah Theatre.

During the mid-1970s Ric was in demand as a jazz soloist and worked with, among others, Michael Garrick, Johnny Patrick and legendary jazz pianist Jaques Dieval. In the late 1970s, Ric pursued both his folk and jazz interests as a member of, respectively, The Albion Band and Soft Machine. He toured and recorded with both bands. With The Albion Band, Ric performed at the National Theatre.

In 1980, Ric and Soft Machine guitarist John Etheridge formed Second Vision. They recorded an album and toured extensively. Ric next teamed up with guitarist Vo Fletcher in music education projects: the duo supported a Musicians Union initiative in schools and recorded for BBC television.

Since 1985, Ric has played full-time with Fairport Convention but has continued to take an active interest in jazz and other musical forms. He has collaborated with June Tabor, Andrew Cronshaw and Martin Simpson among others and also recorded solo albums and a violin tuitional introduced by Jools Holland. His session credits include Roy Harper, Jethro Tull, Strawbs, Pentangle, Gerry Rafferty, Loudon Wainwright III, Robert Plant, The Fureys, and Ashley Hutchings among many others.

As well as Fairport Convention, Ric has his own trio, The Ric Sanders Trio, with Vo Fletcher and Mike Gregory. The group performs a wide repertoire of jazz and good time blues

Written music for the BBC, Art exhibitions and much more.

Has been ‘pianist for hire’. Slept on couches, worked ships, busked around Europe, played 5star hotels and played in most European capitals. Always writing and playing, based in Birmingham most of his life, lived and worked all over the planet.

Sam is a musician, composer and producer, playing guitars and the Arabic Oud for a number of eclectic jazz, world and roots music projects, alongside long-standing touring and writing with the critically acclaimed gypsy jazz, flamenco and contemporary classical instrumental band TG Collective, and Anglo-Polish singer songwriter Katy Carr.  He has performed worldwide, from the mountains of Bulgaria and castles of Spain, to the many festivals and concert halls of the UK, and car parks of southern Serbia!

He has played on live sessions from BBC Radio 4’s Loose Ends to Poland’s Trójka Radio, with his music featured on television from NBC and ESPN to the BBC, ITV and CBeebies!  In 2020, he won Best Crime/Investigative Track from the American PMA Mark Awards for his co-composed string quartet, A Curious Voyage.

At last, like some large furry dog coming out of a lake we shake ourselves off after months of uncertainty and get to some planning. In this case particularly for evenings.

As a lot of our musical friends are desperately missing somewhere to play, we thought it would be nice for them, and us, if we shared our space with them and you as where better to hear some lovely music than in the safety of a gorgeous outdoor space?

Now in normal times we’d organise well ahead as so many people have busy lives and full diaries but let’s face it right now not many of us have social engagements or much else come to that in our diaries. This might give us a rare chance to programme at quite short notice in order to give us all the best shot with England’s unpredictable weather right now.

So what are we thinking?

Well, be prepared at just a week’s notice to be invited to some Summer Evening Musical Soirees across a range of musical styles, we’re thinking some Classical, Folk and Americana, Mellow Jazz, Acoustic Reggae, Light Opera and more. All to be enjoyed with safe distancing, good company and you’re most welcome to bring your own picnic or refreshments so no hanging around at a bar or such.

So signup for our newsletter or check back here under events to be sure to see what we’re up to.

Stay safe everyone and look forward to seeing you soon

August in the Gardens is so packed with lovely activities, performances and treats there is surely no reason to risk those queues and crowds by going any further afield.

In the ‘New Normal’ we have revamped some of the way we do things and almost all activities now will be ‘pre-booked’.

So, in addition to normal Day Entry and our popular picnic takeaway ‘Cream Tea in A Box’ we have for visitors delight;

First Songs musical sessions for babies and their grown ups and Relaxed Concerts by the renowned  B’Opera who create  beautiful music for tiny ears.

Yoga sessions with Yogi Clair  – two sessions in the outdoors follow by a cream tea.

We have so many charming spaces in the Gardens and we are really pleased to be able to use them to enhance these sessions – what a memory to be made! Baby’s first ‘move and groove’ under the heritage apple trees. 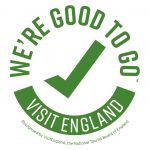 Tickets for Wind in the Willows and Alice in Lockdown will go on sale on this site by the end of this week.

You can travel the world through the plants in our Gardens. By the early 1700s plants from five* different continents could be found growing in England.

Plants had been gathered and collected over time for their economic potential as crops or medicine, or for their rarefied beauty and shown off by the rich and powerful,or subject to scientific scrutiny.

While the time of the great 19th century plant hunters was still to come, the variety of plants, their very ‘exoticism’ was valued over and above more modest plants which might have been grown and used for centuries.

Today in the Gardens they all mix together, from little ‘weeds’ to flamboyant dragons. We are so used to some, we forget that their origins may be far, far away or from a long time ago.

Re-finding the wonder –  and recognising our luck – that we are so entwined with, and dependent on, other places in the world is perhaps one of the humbling outcomes of the current crisis.

In 1738 George Frederick Handel premiered his opera, Xerxes, in London.

As with many theatrical productions of the time the ‘idea’ of the countryside was shifting from that ‘uncivilised place’ which is dirty, smelly and dangerous, to being a pastoral idyll, a place of purity and innocence.

Handel – a German composer  who spent most of his life in London – reworked an older Italian song by Cavalli and Bononcini. The opera is about the ancient King of Persia, Xerxes. Here the American countertenor, Christopher Lowrey  sings, in Italian, with a group of musicians playing instruments made variously in Paris, the Netherlands, Florence and Germany.

Like our Garden…a composition made beautiful because the world comes together in it.

(feel free to donate to the musicians)

By the way, the character is singing the praises of a Plane tree (Platanus orientalis ) – No, I don’t think we  have one ..

*Five continents not 7 in the Gardens. Westerners had not reached Australia by the 1760s, and Antarctica,was a bit harsh

The amazing young performers of the K’antu early music ensemble provice a fun and lively  ‘have a go’  music making workshop this summer afternoon (1pm -2.30pm)…

Watch out: vegetable flutes may be involved :-)))

Later at  3.30pm K’antu will enchant us with a concert of early music  in our 17th century Gardens