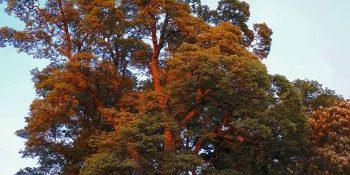 You can travel the world through the plants in our Gardens. By the early 1700s plants from five* different continents could be found growing in England.

Plants had been gathered and collected over time for their economic potential as crops or medicine, or for their rarefied beauty and shown off by the rich and powerful,or subject to scientific scrutiny.

While the time of the great 19th century plant hunters was still to come, the variety of plants, their very ‘exoticism’ was valued over and above more modest plants which might have been grown and used for centuries.

Today in the Gardens they all mix together, from little ‘weeds’ to flamboyant dragons. We are so used to some, we forget that their origins may be far, far away or from a long time ago.

Re-finding the wonder –  and recognising our luck – that we are so entwined with, and dependent on, other places in the world is perhaps one of the humbling outcomes of the current crisis.

In 1738 George Frederick Handel premiered his opera, Xerxes, in London.

As with many theatrical productions of the time the ‘idea’ of the countryside was shifting from that ‘uncivilised place’ which is dirty, smelly and dangerous, to being a pastoral idyll, a place of purity and innocence.

Handel – a German composer  who spent most of his life in London – reworked an older Italian song by Cavalli and Bononcini. The opera is about the ancient King of Persia, Xerxes. Here the American countertenor, Christopher Lowrey  sings, in Italian, with a group of musicians playing instruments made variously in Paris, the Netherlands, Florence and Germany.

Like our Garden…a composition made beautiful because the world comes together in it.

(feel free to donate to the musicians)

By the way, the character is singing the praises of a Plane tree (Platanus orientalis ) – No, I don’t think we  have one ..

*Five continents not 7 in the Gardens. Westerners had not reached Australia by the 1760s, and Antarctica,was a bit harsh