Auricula …not a very prim primula

On Easter Bank Holiday Monday,  the nursery people from HillView will answer questions, give advice

about growing, and of course sell you some of their lovely range of plants, which will be at their height around this time.

The Primula auricula is usually known as auricula, or by the folk names of mountain cowslip or bear’s ear. The upright stalks and colourful headed flowers were popular, and coveted,  from the early 17th century. Rare beauties were so prized that they were sometimes presented to a seated and expectant audience, appearing from behind a curtain, with many ‘oohs and ahhs’.

As growers became ‘enthusiasts’, this approach led to the practice of displaying the plants on layered shelving or within a framed arch – just like a theatre. Some ‘ auricula theatres’ were modest others, 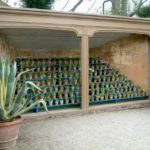 As a 17th/18th century Garden, there would undoubtedly have been auriculas grown here. 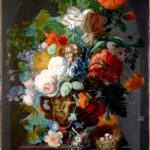 by courtesy of the National Galleries Scotland

In the Music Room this summer we are displaying a reproduction of a flower painting (from around 1712, by Dutch painter Jan van Huysum). We already grow most of the flowers that appear in his picture … but not auricula. So…

Our, modest but authentic, Auricula Theatre will complement the season of mini-flower exhibits reflecting the picture in the Music Room.

Come along on Easter Bank Holiday Monday to find out more.

Part of our #GrowtheGardens fundraising this year.